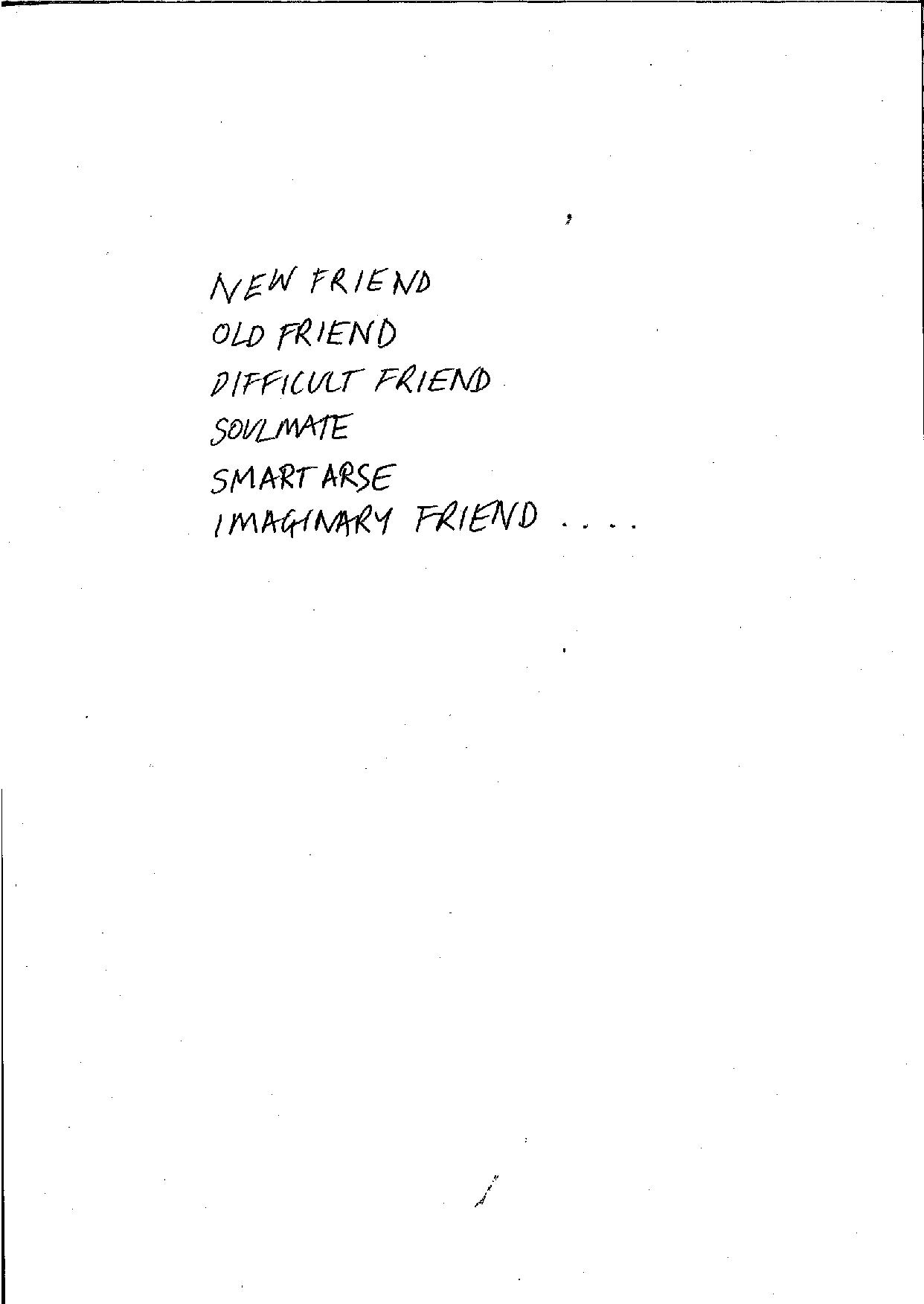 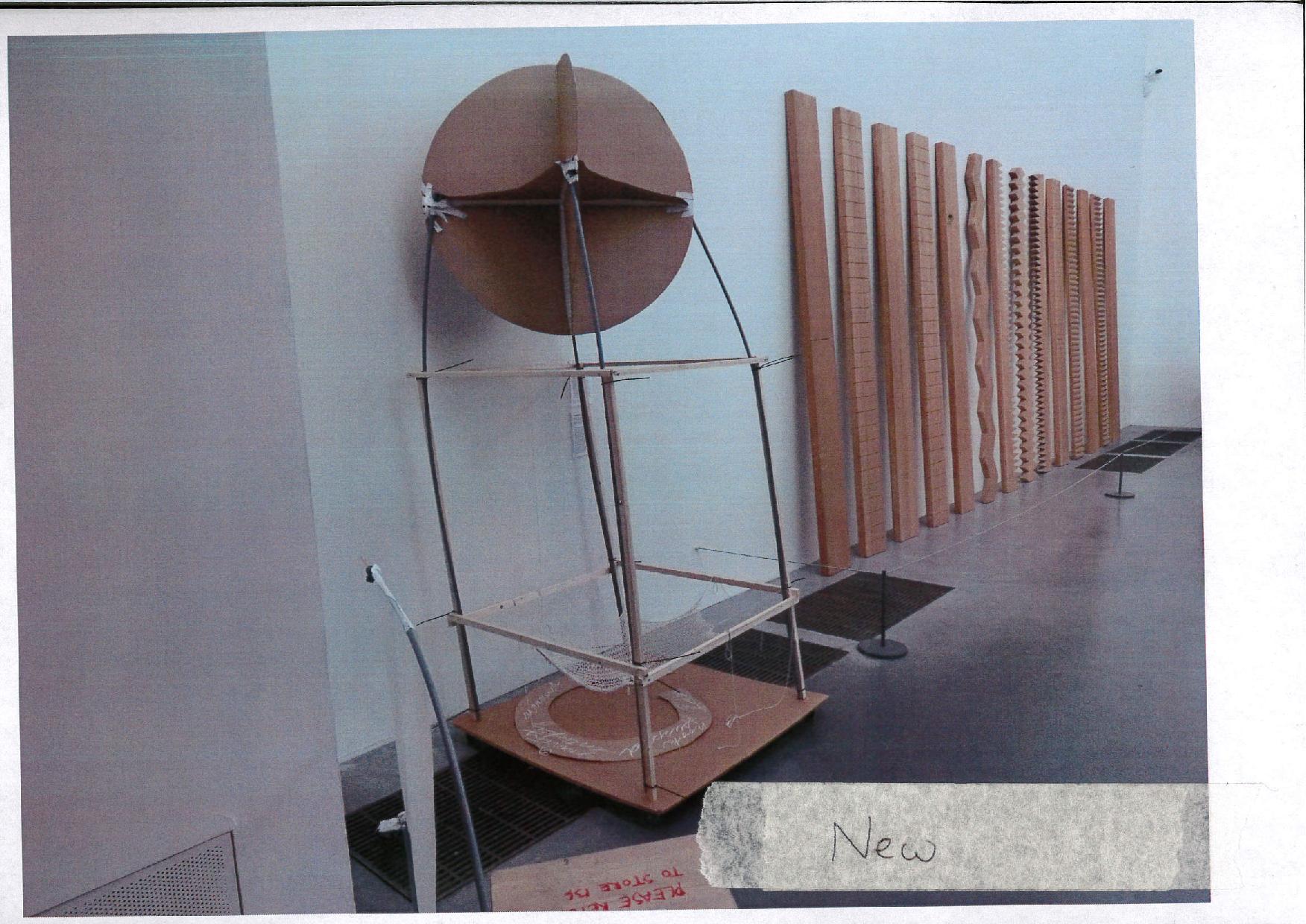 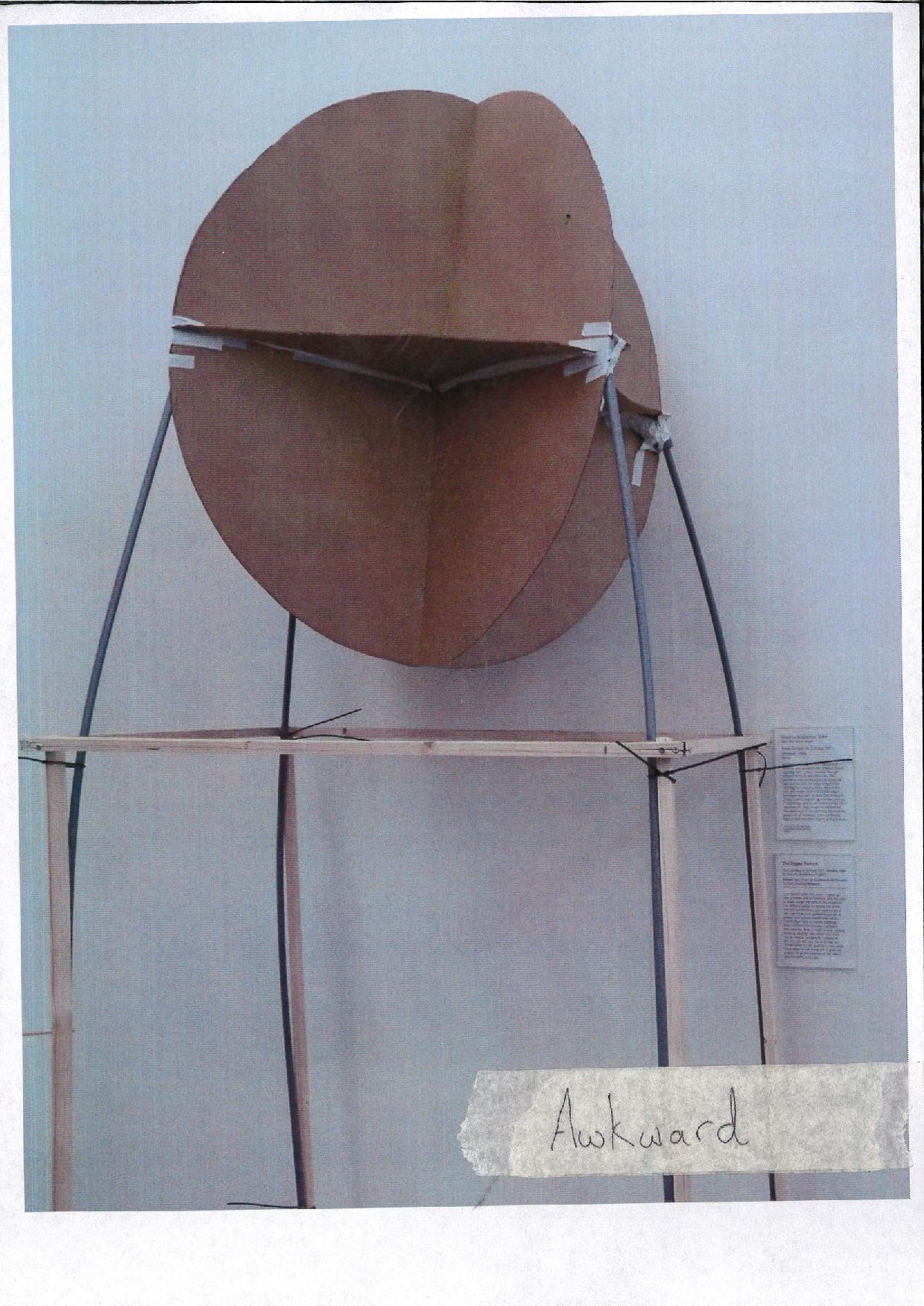 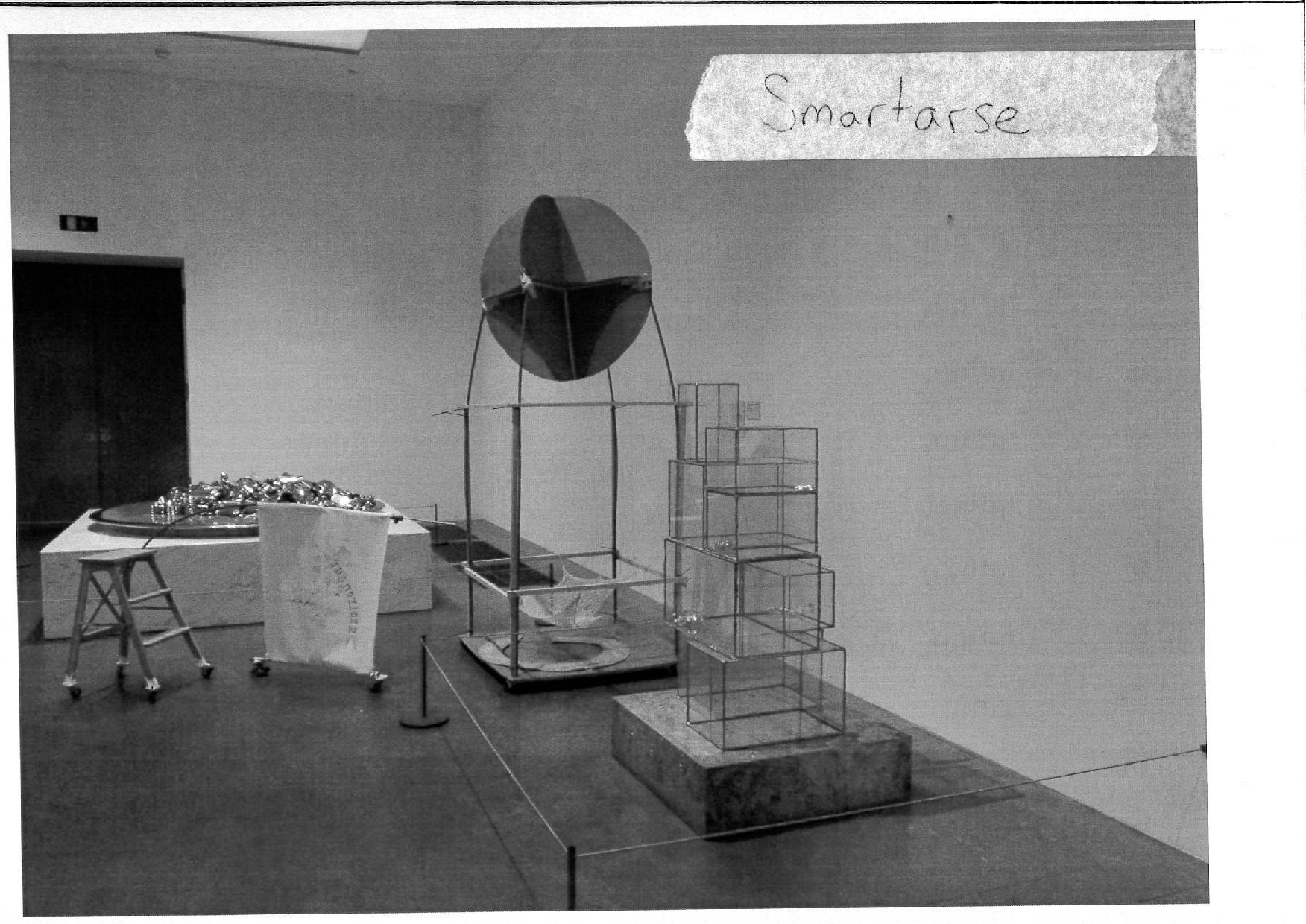 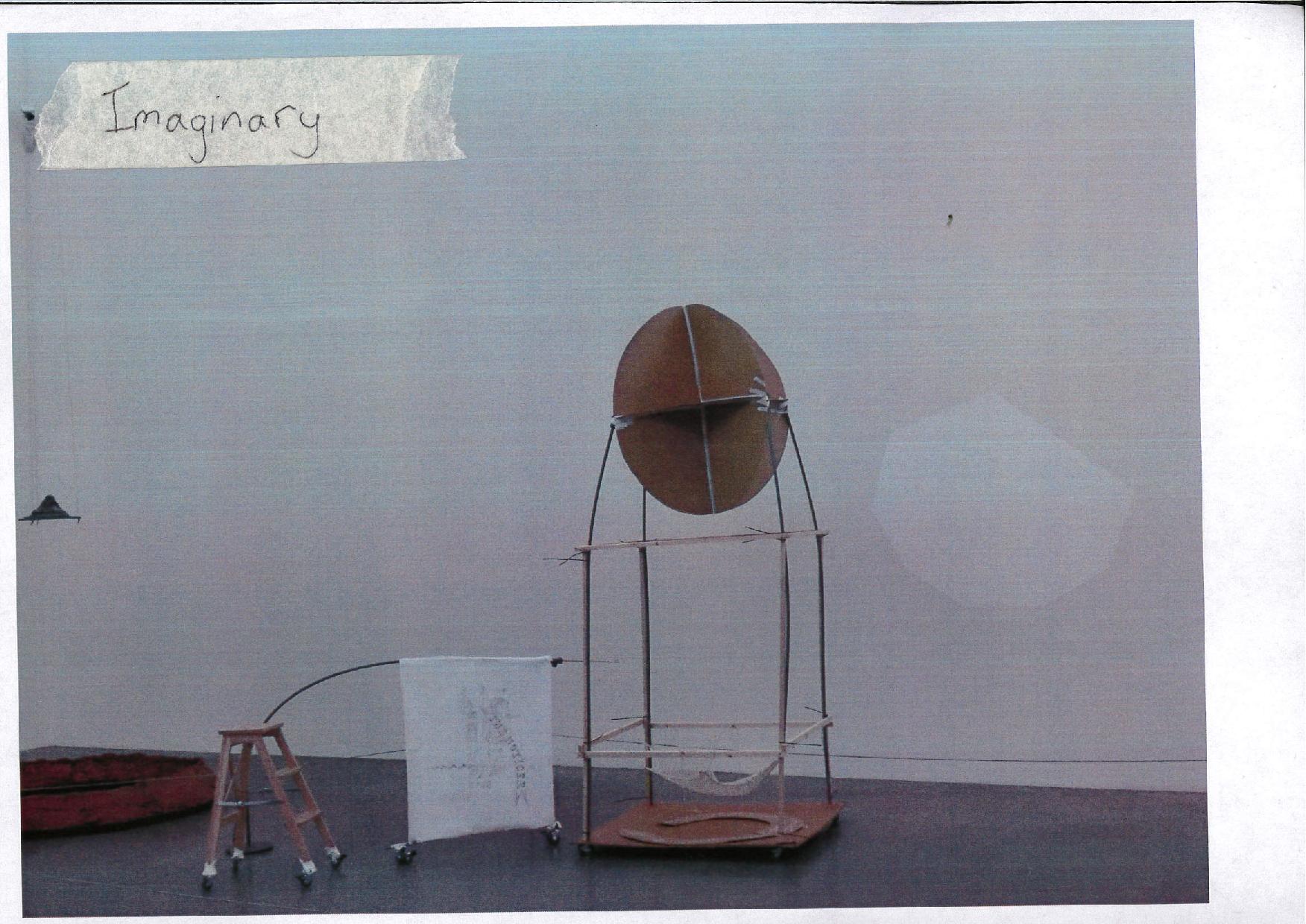 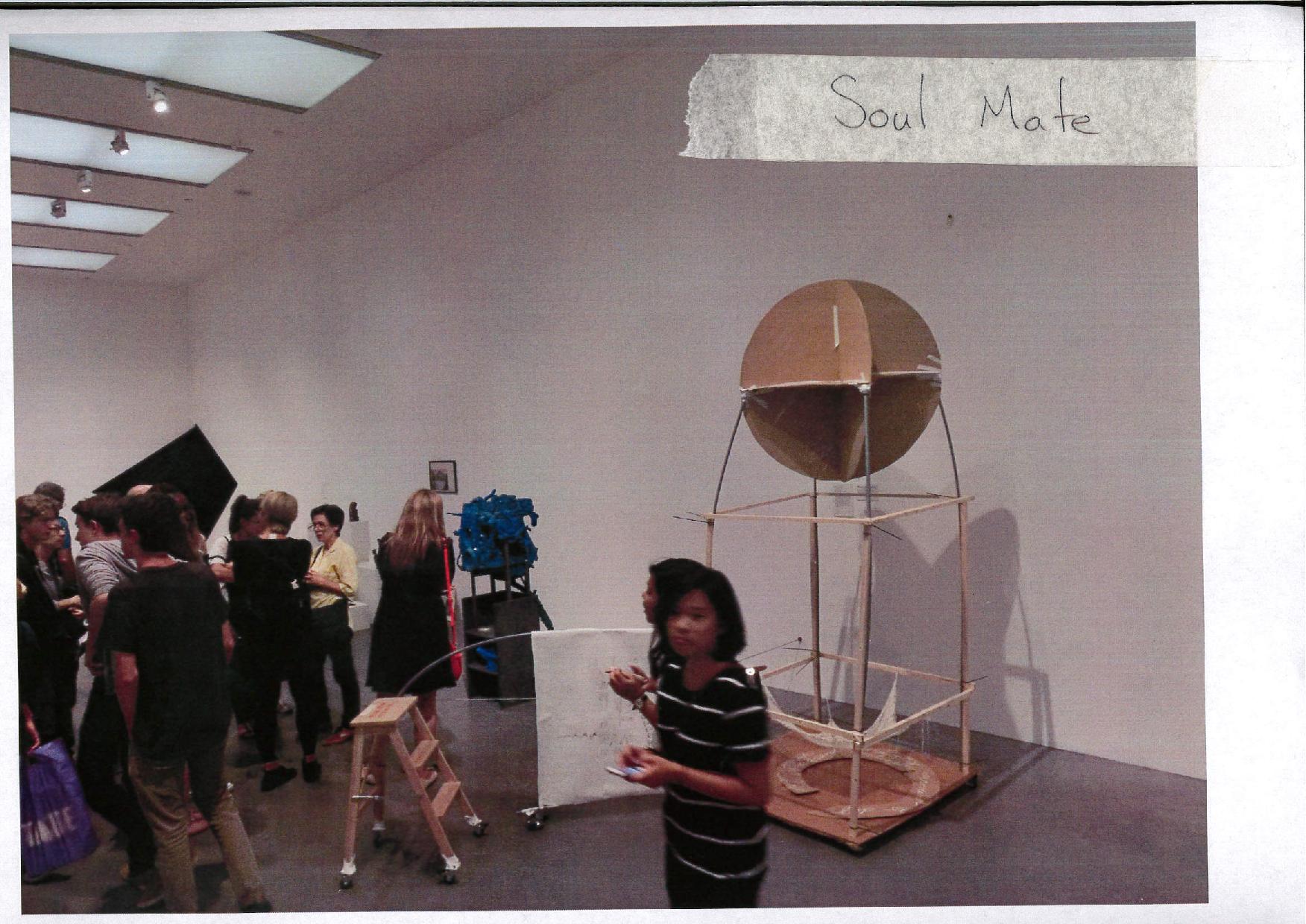 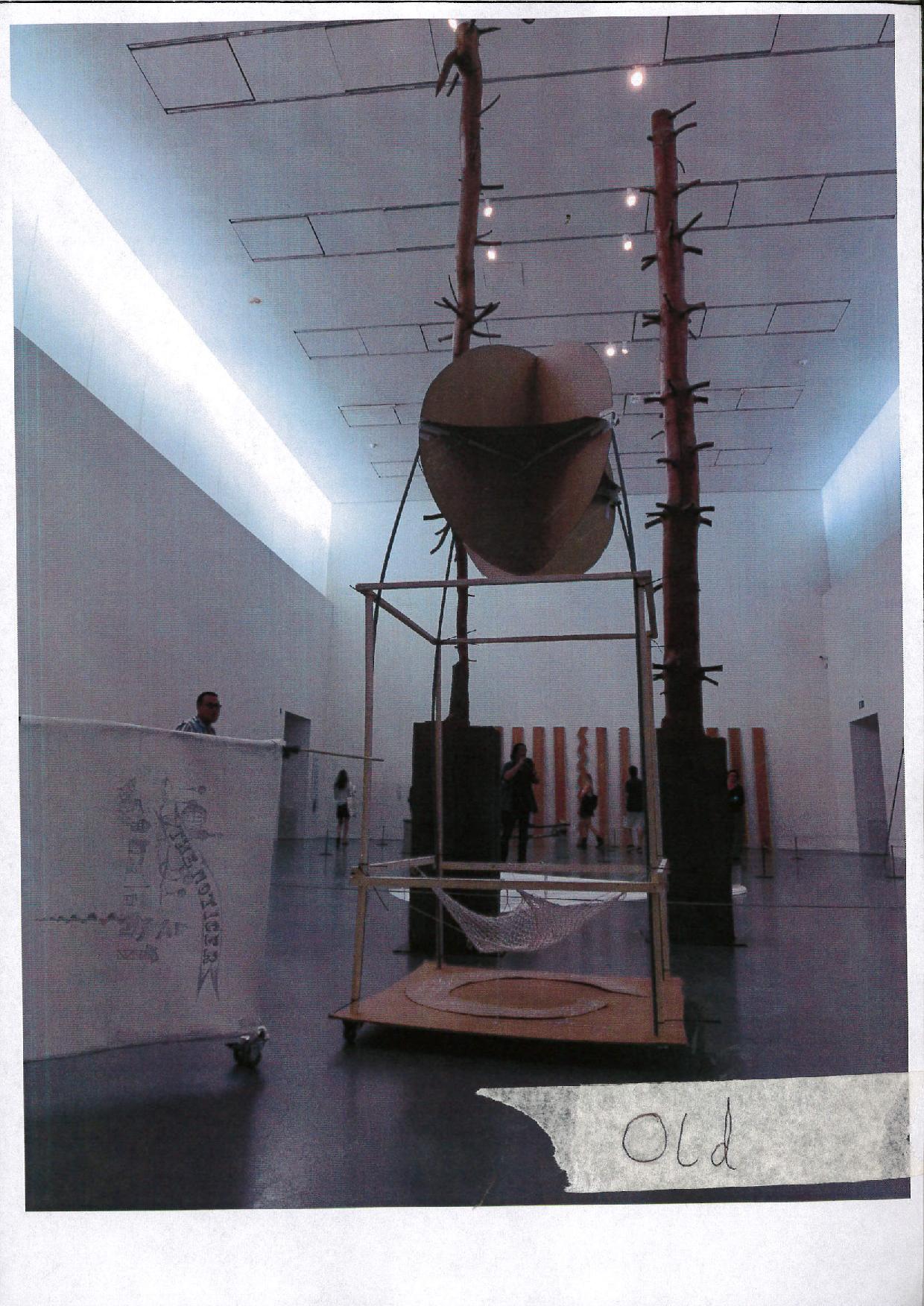 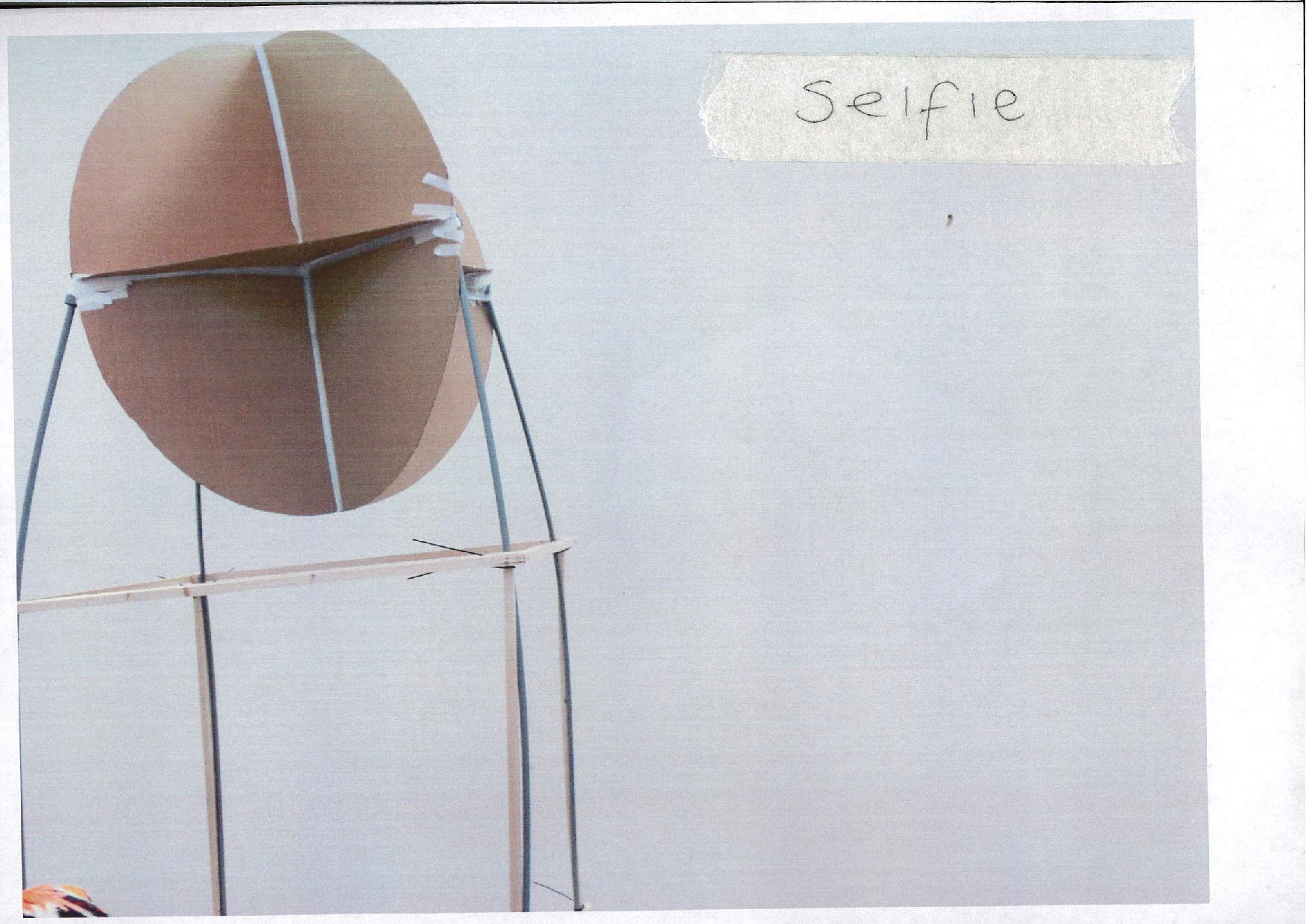 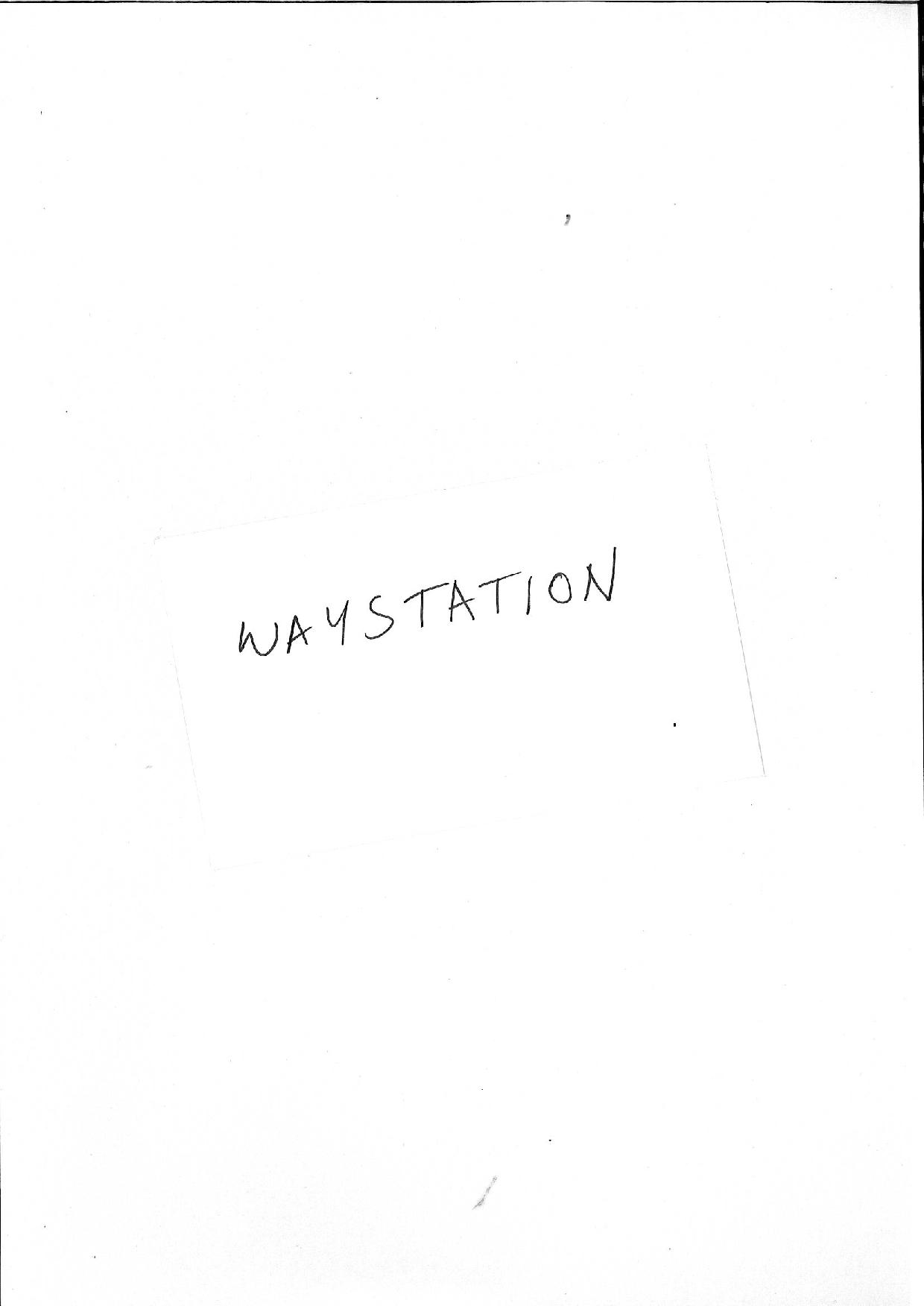 Participants return to their groups and consider and interpret each of the instructions so as to develop their object in order. The objects will need to be made portable in order that they can be taken in to the collection later on.

12.15: Staying curious
The group is introduced to Huberman’s curiosity curve.

How do we stay curious? Can we consider the Noticer as a “way station” (Ingold); part of a process to somewhere else. How do we draw the week to a close without ending the process?

2.00: Finding friends
The group are introduced to the Boetti resource: e

We disclose the process of producing this resource and of the concept of “finding friends” for Boetti, literary, conceptual and artistic.

Participants are asked to visit the gallery to watch a projection of the Object Autobiographies on to an artwork. Untitled #05 t/c  has been selected because it groups together a series of objects and images from a variety of cultural, artistic and ethnographic sources.

Taking their Noticer directly into the gallery, each group is asked to find each of the above friends of the object they have made. To do so they consider its characteristics: material, functional and aesthetic. They take photographs of it alongside its friends and devise presentations to be delivered back to the whole group.

4.30: S-T-O-P
The mobile blackboard is wheeled into the turbine hall.

Working in two groups, one on either side, the group is asked to “draw the week” on the board in a timed performance. The blackboard is wheeled back to the space and the Summer School is brought to a close. 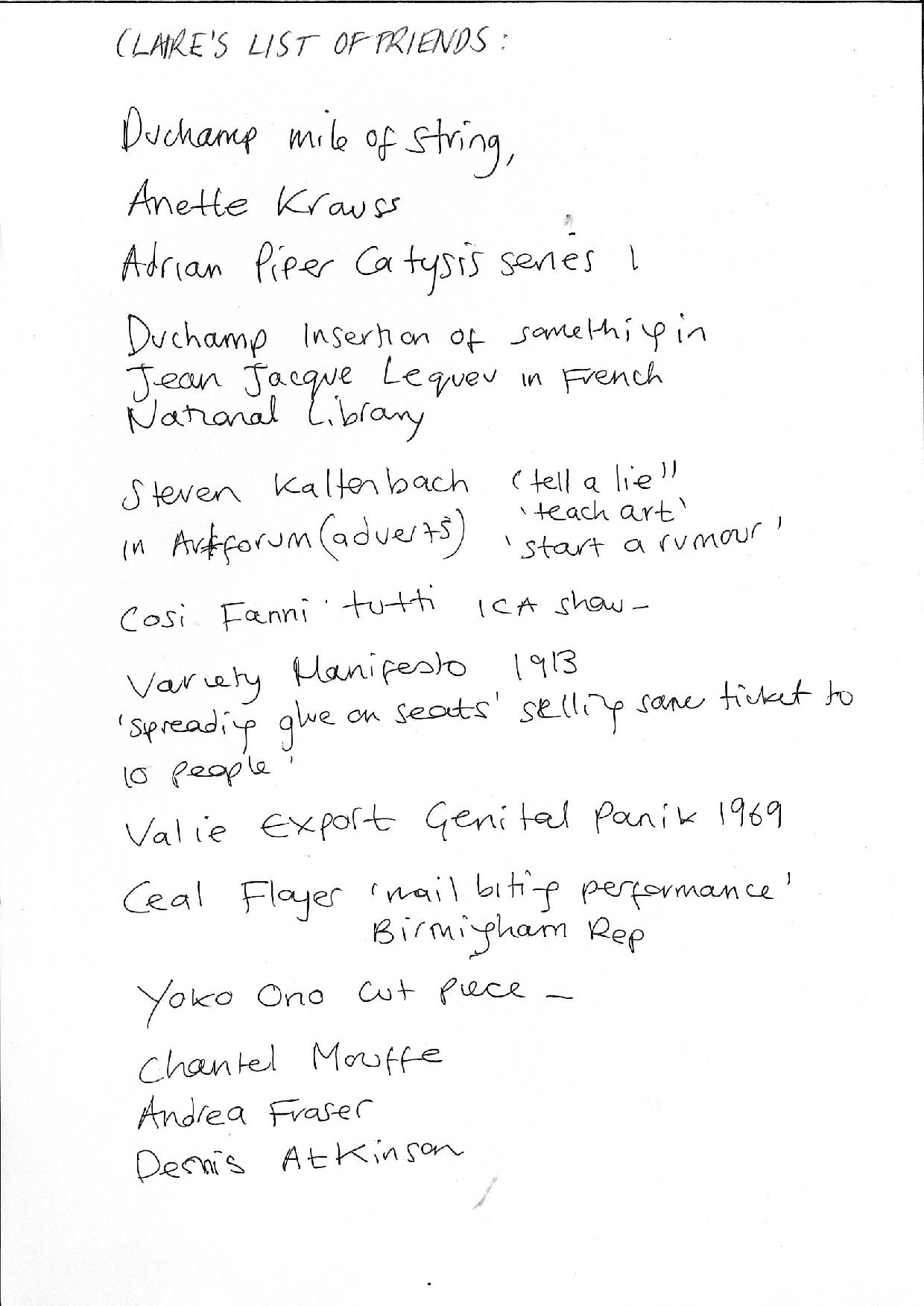 10.30: Meshwork / Messwork
The most salient material is moved from the mobile blackboard to the fixed blackboard.

10.45: Not Extra but Vital
The group is shown two short films, preceding an open discussion with filmmaker Tony Grisoni. We consider the impact on our choices about Noticer/s; Does the object become refined? Is the object allowed to remain unwieldy?

In How to De-clutter your Home we watch an American self-help video on you tube in order to raise the notion of hoarding as negative and de-cluttering as a positive state.

Essay on David O. Selznick, Neorealism and Life is a video essay by comparing the contrasting Italian/Hollywood editing techniques used in versions of the same film named Terminal Station/Indiscretion of an American Wife respectively, giving rise to the notion that extra information can be valuable. We use these films to through focus on the decisions we might make around the editing of the material we are gathering. A conversation with Tony Grisoni helps us to articulate this thought process, drawing our attention to his acceptance of feeling “meagre, false, ridiculous and useless” in the pursuit of creativity.

11.15: P-A-U-S-E
The mobile blackboard is used during and after the screenings and discussion to record Noticings.

11.40 Edit by memory
Participants are asked to visit the collection with only a camera to record.

2.00: Edit?
Groups return to the making of Noticer/s

With the notion of edit in mind participants debate the necessity of editing.

3.30: Distraction
The artist Clare Makhlouf Carter is introduced to the group and her presence reveals that she has been causing subtle distractions in and around the studio.

Makhlouf Carter discloses the object, text and behavioural disturbances she has authored throughout the session in response to the specific request to ‘Cause a Distraction’. She talks about her practice as a whole, with reference to the historical and contemporary art context. See Appendix 3

4.15: Edit by distraction
We recall the individual works chosen from the collection earlier.

4.30: S-T-O-P
The most salient material is moved from the mobile blackboard to the fixed blackboard. 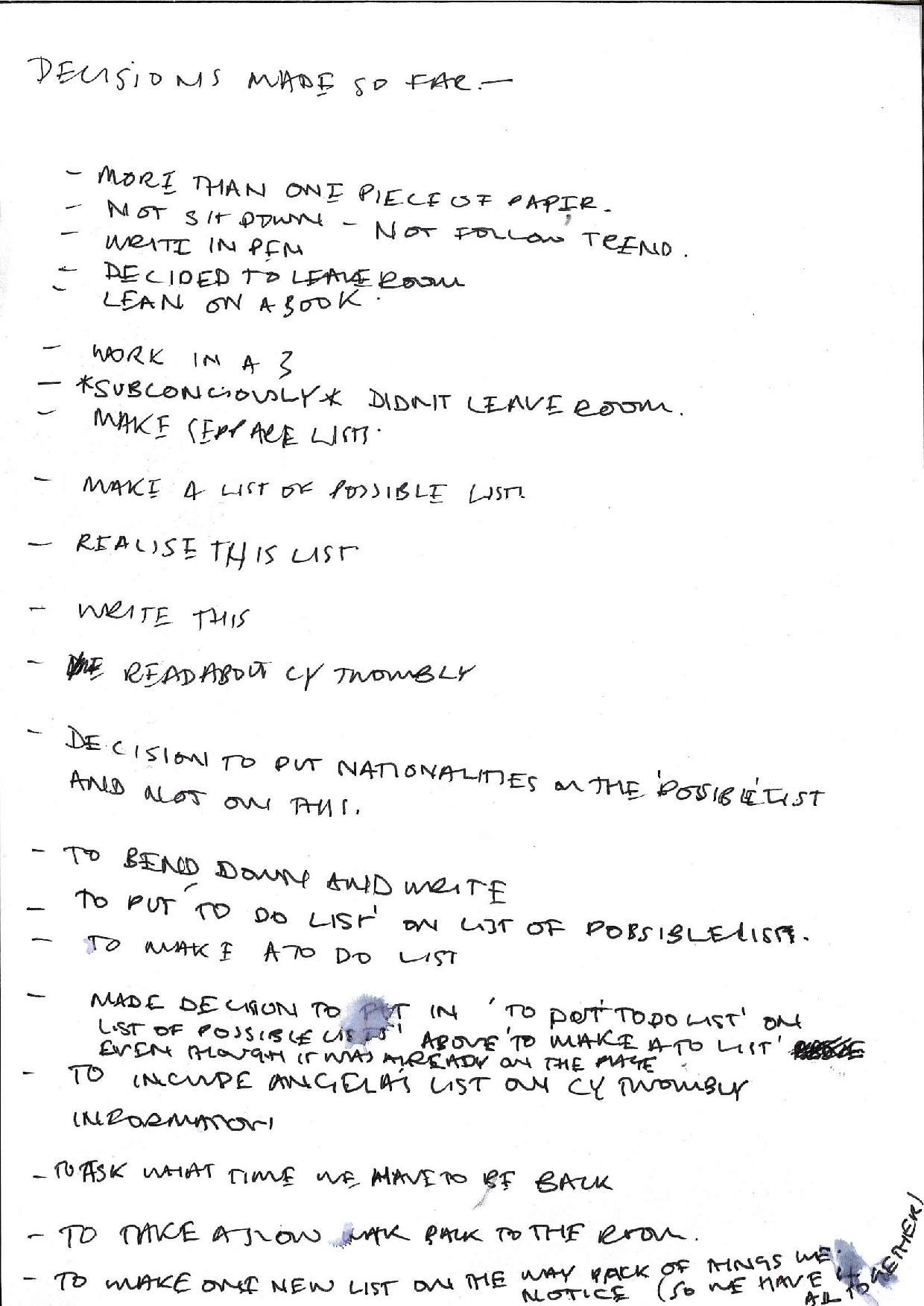 With only a stack of paper and no further instructions the participants are invited to work in pairs to respond to the collection. Each of the partners takes half of the list back to their original group to influence the making of Noticer/s.

10.45: P-A-U-S-E
The mobile blackboard is used during and after the screening to record Noticings.

11.00: The Social World Of Objects
Artist Simon Pope draws attention to the ways in which our Noticer/s might be drawn to other objects and people to form a community, public or social world.

Pope shows examples from his recent work Primary Agents Of A Social World 2014, in which he traces the relationships between a large coal sample held at National Museum Wales’s large-object stores and the various people and things which have had a transformative relationships with it. In a short film he attempts to reveal the ‘social world’ of the object by assembling a small group of individuals who have had specific and strong engagements with the piece of coal, forming a community with the object as its catalyst, protagonist or hub.  Additionally through The Outlier (2014) Simon introduces notions of a ‘public’ as being engaged rather than unconsciously co-opted in relation to the Noticer’s core ideas of seeing and noticing.

2.00: Transformative Relations
Simon’s working method was to seek-out material transformations of one thing by another; an exercise which he asks Summer School participants to perform for the Noticer/s.

Participants identify, imagine and collate possible material, transformative relations for the new object. They create a script with the voice of an object/material.
What are the materials?
What are the processes that have been used to transform them?
What are the qualities of the relationships at each transformation—such as of care, exploitation, etc.
Where are the object’s materials given attention? (and where/when are they overlooked, ignored, taken for granted?)
How did they get to where they are now? e.g. how were they transported, traded, stored, exchanged?
Who are the people that transform or are transformed by the materials?
What are the things‚ other than humans, that transform or are transformed?
How might we represent these relationships? Is this possible, or even desirable?

3.30: Object Autobiographies
Each participant contributes to a performance to camera.

For each person or thing that the Noticer/s have a relationship with, the participants describe the relationship from the point of view of the object.

Written, spoken and recorded for camera each participant makes a series of short autobiographies.

4.30: S-T-O-P
Noticings are recorded on the blackboard. 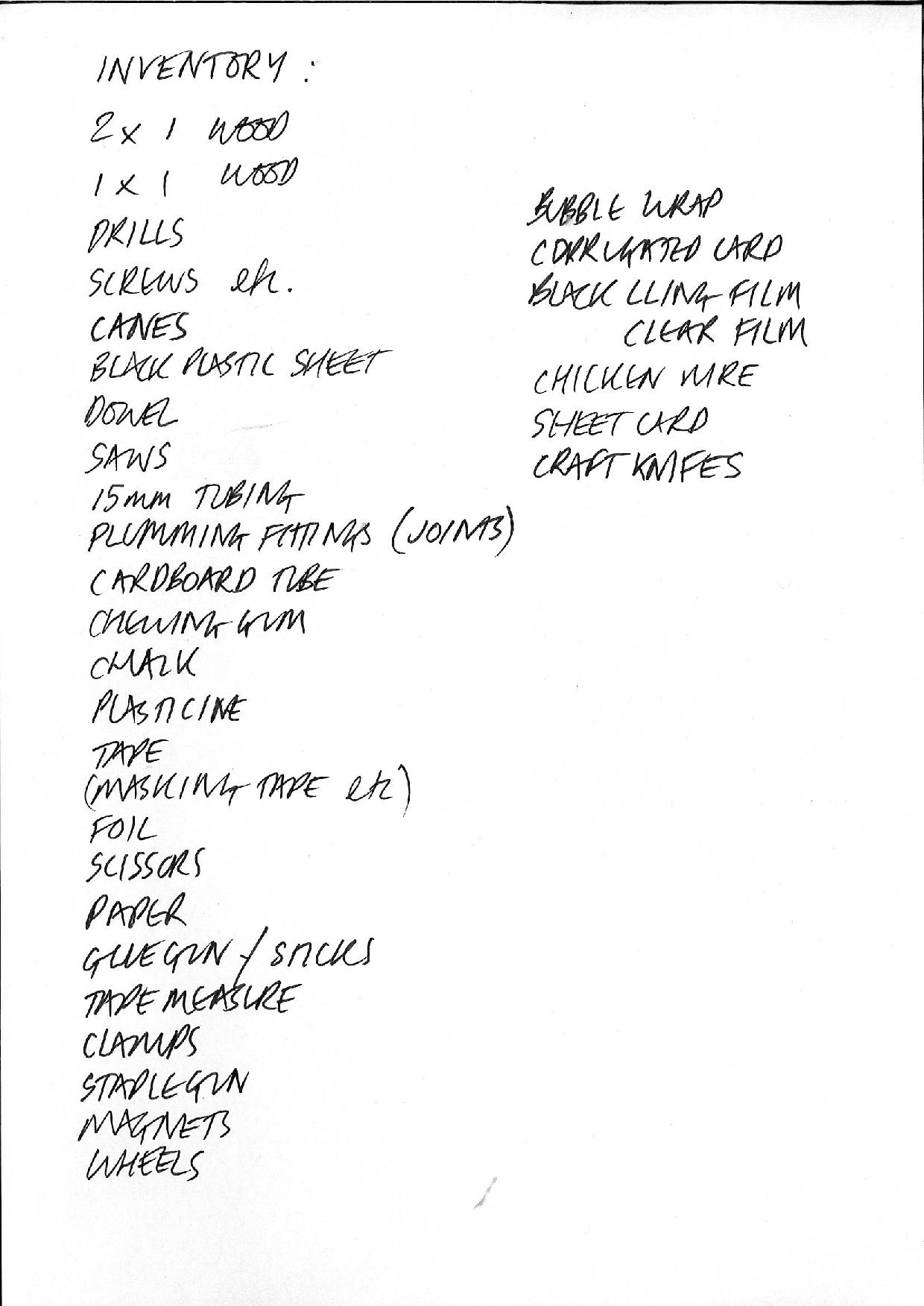