I was just clearing out a draw in the kitchen.  It was a draw full of stuff (everyhouse has one).  In the draw I found these 2 magnets, they had pulled all these objects to them.

In a recent conversation about ways in which artists look in order to find things out as a part of their process of making, Jo shared her practice of looking away from the work and then back again quickly in an attempt to trick herself into seeing anew/again/afresh….the following quote seemed relevant:

‘Closing the eyes can be adopted as a critical operation for seeing that which the retina refuses to acknowledge’
Emma Cocker, Tactics For Not Knowing. Preparing For the Unexpected

My desk had been cleared. It’s a small, light-colored office model with a chipboard top and steel legs, and it blended nicely with its surroundings. Beside the glass with the sawdust in it, there is an elongated piece of wood with holes at one end, rounded edges, and slanting grooves of varying width–a so-called hand fondler, carved years ago by my son (more or less as a school exercise), blackened from handling, but still smelling of fresh wood, just as the brown, fist-sized, hardened lump of clay beside it, whenever I pick it up, takes on the smell of the damp gully from which it was taken years ago….

All these objects might be termed my “callers to order,” because, by pleasantly diverting me now and again, they save me from losing myself entirely in my work.

My friend Simon gave me Across by Peter Handke a while ago now and this passage about the writer’s desk stayed with me. I think I’m attuned to words about objects. Around the same time I read  Thoughts of Sorts by Georges Perec. In it he describes the objects on his desk and the place in which he thinks.

My friend Louisa Minkin made a great piece called The Study of St Jerome after Saint Antonello Da Messina where by an MDF interpretation of the desk from the painting staged performances and artworks by other artists.

Callers to order, philosopher’a stones, desks and writing cases; all are brought together in Brian Dillon’s text for Frieze:

As the novelist Georges Perec – who later composed an essay on the objects on his desk – points out in Species of Spaces (1974), the study is itself a piece of furniture: Jerome inhabits his desk as though it is the cockpit of an interplanetary vehicle, adrift in theological space and time.

Is Noticer an interplanetary vehicle?

Where does recognition come in the act of noticing? Do you only notice (rather than look at) something you recognise? You have noticed something because you have been stimulated by recognition. Do we fail to notice things that don’t relate to a set of already present (and waiting to be noticed) connections? What don’t we notice and why?

Yet anecdotally people often say they have started to notice something/s. Can noticing be encouraged/stimulated outside of our already present and waiting connections? 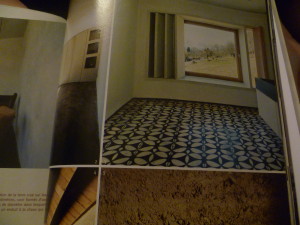 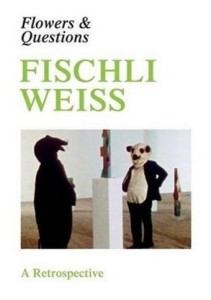 We talked about Fischli & Weiss’s work and the way they question the world.  My student Joe reminded me of this in his research report where he quoted Bice Curiger, the editor of one of my favourite catalogues Flowers & Questions:

‘When you start asking things, you initiate an endless process, you open up a can of worms, which is what the two artists are desperately trying to tell us’

Isn’t this what we want Noticer to do?
To open up a can of worms?

I’m on really delayed train so here’s my first post on my iPhone – if I can make it work! 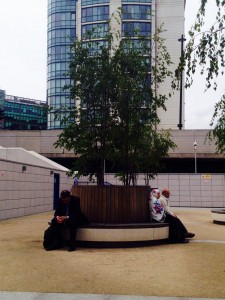 We talked about the magnet as a metaphor for noticing: the current of noticing, being equivalent to magnetism. We were thinking of a Noticing Tool that might pull relevant information towards it. And whilst we were talking outside paddington station, we watched people sucked in by the gravitational pull of the municipal planters / seating. Lucy sent me this link once. We must look at it:

A magnet pulls things to it.  It has become a recurring “thing” in our conversations.  Is the Noticer the equivent of a magnet?  Pulling things to it (ideas, people, objects, questions)

Some of the things/thoughts/questions/observations that have been gathered so far?

Noticing and looking are different physically.  They feel different. 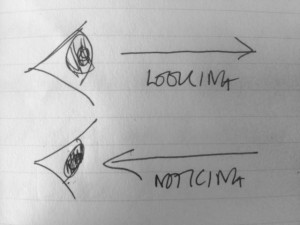 This is the email sent earlier this week.  It seems important to include it at this point because it summarises things so far.  It has been sent as an invitation to a group of architect students who we would like to work with on the design of Noticer .

This is the beginning of Noticer.  The conversation started a few weeks ago but this is the start of the blog. 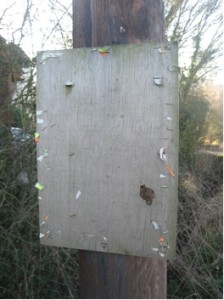